For about 4 years the driver seat in my truck has been ripping. The rip got to about 8 inches long in that time. I was looking into calling an upholstery shop until I saw this video:

I decided to give it a try and although I don’t have a before picture I do have an after picture. Not bad for my first try!

You can tell it wasn’t done by a professional but you also can’t see the threads… much. I’m pretty happy with the way it turned out!

I haven’t written much about retirement plans lately because there isn’t much progress on that front except for the slow crawl of getting through the years to get there.  After starting with my present employer I found out that to receive the pension I must put in 10 years of full-time non-probationary employment with them.  As our probationary period is 1 year I have to work 11 years total before I can retire and get my pension.  At this point I am at the 8 and 1/2 year mark.

My brother is doing just this.  In fact he blantantly STOLE my idea of living in an RV full time and travelling.  (That’s humor folks, don’t get upset.)  But you did read it here first!  It was MY idea.  NO one EVER thought of this before me! 🙂  He and his wife are selling their home and embarking on a journey to Texas this week in his Airstream travel trailer.  Good for them.  I hope they enjoy this new chapter of their lives.

But as this post is titled, we haven’t given up the dream yet.  This past year we have struggled over whether to get a smaller trailer and take shorter trips while having a small “home base” to return to.  My wife has been looking at homes both near and far for several months now.  This past two weeks have been a game changer for her.  We went to look at the smaller trailer we were considering.  I asked her to just spend some time in it with me.  After 30 minutes or so she needed to get out.  I then asked her to imagine spending a rainy weekend in that small trailer.  Not a pleasant thought but the weather isn’t always sunny when you’re camping. 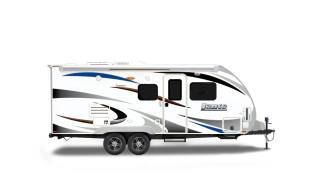 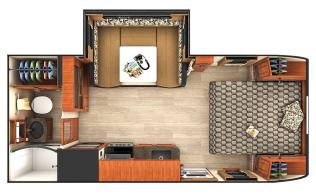 When we got home I showed her a slightly larger (yet oddly, less expensive) travel trailer.  The Grand Design Iagine 2670MK Travel Trailer.  It has a much more spacious floorplan and a desk which was a feature we loved!  It was easy to just sit in the recliners and either nap or read.  It alsoWe could see ourselves spending time in this trailer.  The only thing we really didn’t like about it was how cramped the bedroom was. 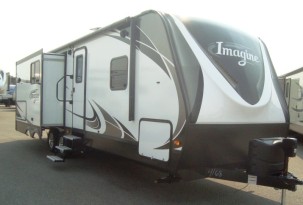 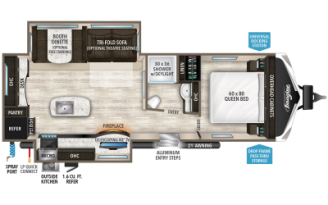 The salesman that was showing us the unit told us that they had a 5th wheel with a similar floor plan but had a bigger bedroom.  Now, we really didn’t want a 5th wheel but it wouldn’t hurt to take a look.  We walked across the lot and he showed us the Grand Design Reflection 320MKS 5th wheel. 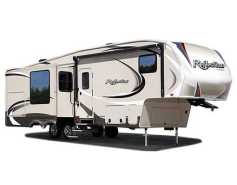 Now… this was more like it!  It had all the same features; desk, outdoor kitchen, but it had a bigger bedroom WITH a closet!  The kitchen had a larger refrigerator and a large pantry.  Cristy was sold.  We spent quite a bit of time in this trailer.  There were some things we liked about the Imagine travel trailer better but the Reflection just seemed more rugged and spacious.  Cristy almost fell asleep in the recliner.

If you’ve followed my blog you know that we’ve changed our minds several times.  That’s the beauty of dreams!   But this is the dream at the moment.

Trailers don’t pull themselves, you need a tow vehicle.  When we were going with the Lance my RAM 1500 was enough to pull it.  The moment we decided to go with a larger trailer the decision was made for us that we had to scale up the truck.  I want to stick with RAM trucks so that part of the decision was made.   The only thing we needed to decide was to go with a RAM 2500 or 3500.   While the RAM 2500 is enough to pull the Reflection 5th wheel, that’s really all it could do.  There would be very little load carrying capacity in the truck beyond the hitch weight of the trailer.  Therefore it had to be the 3500.  It would EASILY tow the trailer and anything we could cram into it.  Decision made.

So… when can all this happen?  We think it’s best to make this all happen while I’m still earning money.  After retirement we’ll be on a fixed income.  So step one is to finish paying off my current truck.  Then we’ll trade it in and buy the new truck.  A few years after that we’ll buy the trailer and hopefully get it paid off before retirement.  We are also talking about selling our house prior to retirement and just living in the trailer in the final few years before retirement.  But dreams are cheap and easily changed.

I didn’t specifically buy this truck to do any towing.  It was literally going to be just a replacement vehicle for the minivan, which, was falling apart.  Especially after seeing the abysmally low tow ratings for the RAM 1500 ST.  Then I started researching light weight travel trailers and starting thinking “what if”?  Then I found the Lance model 1985 travel trailer.  It has a gross weight well under my truck’s max tow rating.  However, I would need to add a brake controller.

I actually already had a brake controller I could have used but it’s the type that hangs down below the dash and you end up knocking your knees on it getting in and out of the truck.  After doing some research I found it was possible to add the factory supplied brake controller.  I used THIS DOCUMENT as my guide to installing the Ram Integrated Brake Module (RIBM) and everything went (almost) well.

When you order the RIBM, it comes with two bezels, one charcoal grey and the other tan.  I used the grey bezel to match my panel obviously.  It installs into the below space in your panel.  Originally there was a small change holder here.  It removes easily with two screws and the RIBM slides right into place.  Ram supplies an extra screw to hold the RIBM in place.  These are Torx 20 screws. 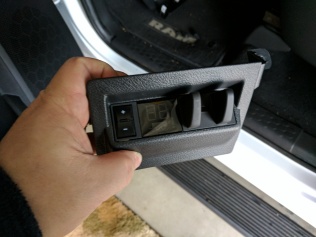 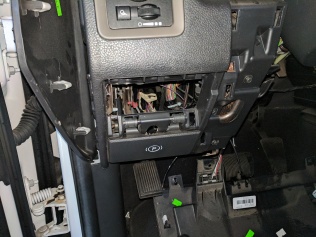 To get at the wiring you have to remove the kneeguard panel just below the steering wheel.  This is super easy as well.  You remove two screws at the bottom of the panel and it snaps out.  Then just let it hang by it’s wiring. 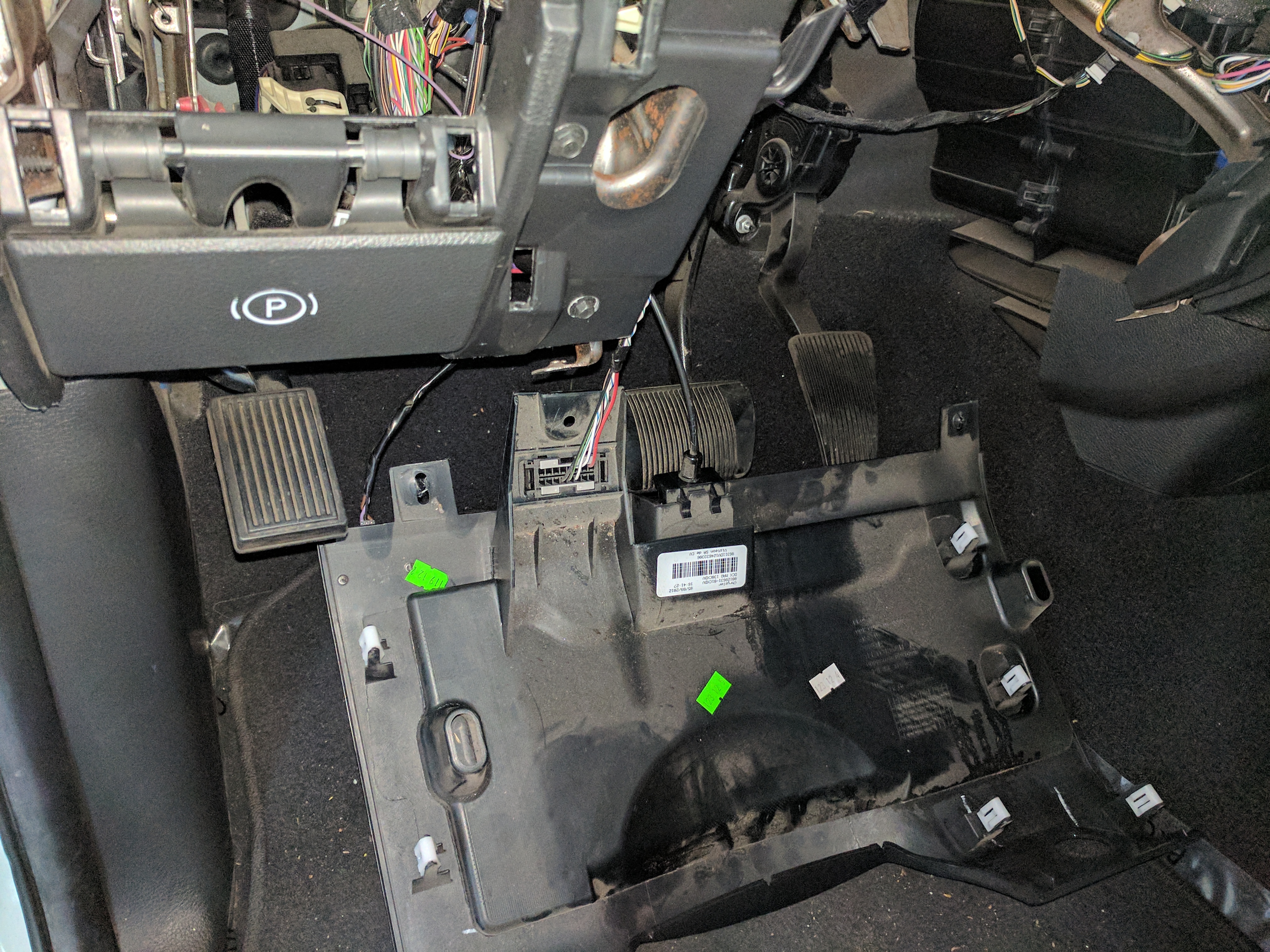 Here is unfortunately where I stopped taking pictures.  To complete the installation I had to tap into the pink wire in the upper right corner of the above photo.  I then had to run this wire over to the brake controller.  The reason I had to do this is because the RIBM comes with two connection ports.  I had the first connector in my truck.  This is the one that goes to the 7 way plug back at my tow hitch.  The second connector supplies power and connects back to the truck’s EVIC or Electronic Vehicle Information Center.  My truck didn’t come with an EVIC so they didn’t bother to put this second plug in.  So at the other end of the wire I ran I installed a small female pin that fit the male pins on the second RIBM connector. (These connectors are available on Amazon.)

I crimped the pin onto the wire (make sure you use the proper crimpers for this or else use pliers and some solder.) I put some heat shrink over the end so the bare metal connector wouldn’t short against any of the other pins.  To make sure the cable stayed on I used some super strong duct tape to tape the wire to the bottom of the RIBM. 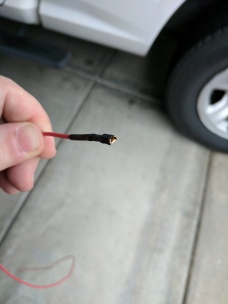 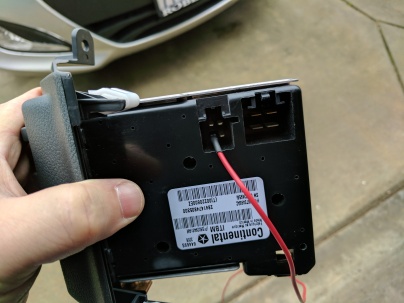 I plugged the red wire into the smaller connector and then installed the RIBM into the panel.  After it was secured I plugged the connector I found under my panel into the second larger connector on the RIBM.  When I turned the key and saw that it powered on I put all the dashboard panels back into place. 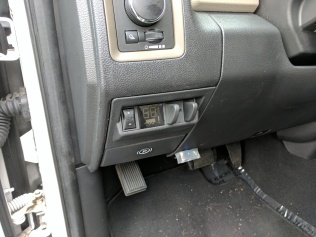 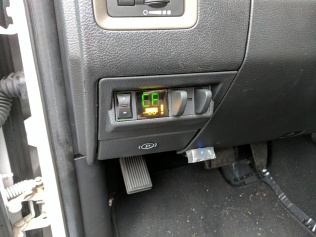 I know that CF means controller fault and that’s because there is no trailer connected.  What I don’t know yet is how long it flashes this message.  I didn’t leave it powered on that long because it was starting to rain.  I’ll do some more research today and see if I installed it correctly.

The CF (Controller Fault) problem has been solved!  When I first read about this installation many of the people who did this before me said that I only needed to hook up the +12V line on the second jack in the controller.  This the the single wire I connected as discussed above.  This was simply not true.  I had to connect the CANBUS + and – lines as well.  Even though I don’t have an EVIC, these lines are needed by the controller.  Otherwise it thinks there is a problem.  After I connected these pins per the document I referred to above, the controller functioned correctly!  I have not connected a trailer to it yet so I don’t yet know completely if the RIBC is fully functional.