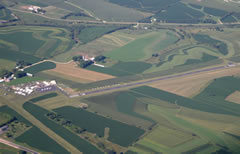 Viroqua (Y51) was my first stop on my way back from Oshkosh 2003.  When I departed Oshkosh, the FAA briefer said it was good VFR.  There was an overcase but I trusted him.  I found out that when a briefer back east says “good VFR” what he means is that you currently have VFR minimums: 3 miles visibility.  I took off and found that we had about 4 miles visibility tops.  I followed another airplane for a while but he soon started to veer south.  I wanted to go west so I kept on heading west.  The ceiling began to drop and soon I found myelf in about a 500 foot band of clear between rolling hills and a dropping overcast.  Then a tower shot past me at 180 mph.  I decided to turn south to see if that other plane knew something I didn’t.  He did.  Within 15 minutes of turning south the overcast disappeared and I was under sunny blue skies.

By this time I had a pounding headache and decided to look for the closest airport.  It ended up being Viroqua.  I landed there, took some aspirin and then took a nap in the unattended FBO.  You punch a code into the door lock to get in.  Inside were a couple of couches and easy chairs.  I took advantage of one of the easy chairs and was not disturbed by anyone for over an hour.  It seemed like a very nice airport but I was on a schedule to get home and didn’t have time to explore it.