Today I went to a mini fly-in with some of the guys from Backcountrypilot.org.  We met up at Truckee airport (KTRK) and departed from there to take a tour of some of the local off airport spots one of the members lands at.  As all pilot stories start out, I got up at O-dark-30 and drove out to the airport to get my plane ready.  It just started getting light at 6am as I departed and turned north into the Sierra Nevada mountains.

It was still as glass this morning as I climbed into the foothills.  I tuned my radio to the predetermined frequency and radioed to see if Emmet, another Backcountrypilot.org guy and fellow Rans Clan member, was airborne yet.  He responded that he was going to fly by some friends that were camping and then he’d fly up to Truckee.  I held my northbound course for another hour watching the sun rise over the peaks to the east.  Soon the pristine waters of Lake Tahoe were on my right and as I crested one more peak Truckee slid into view. 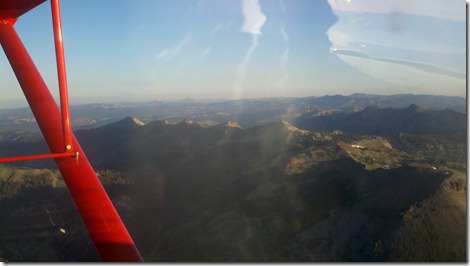 I made a crosswind entry to runway 19 and made a greaser.  I know, weird huh?  I taxied to the south side of the field and found the other guys.  I fueled up and show up for the briefing which was just finishing.  Kevin, (AKTahoe on Backcountrypilot.org) gave me a quick rundown of the plan.  In a nutshell it was tune to 124.20 and follow everybody.  Roger that.  I got back in my plane and followed the other guys to runway 01.  It was really cool to see 6 taildraggers all taking off one right after the other into the crisp blue Sierra skies.

Being low man on the totem pole I pulled into the rear of the loose gaggle of planes.  We first flew past a sweet strip next to one of the three reservoirs (I think it was Stampede) near Truckee. Kevin then took us to a strip he calls Mile-Hi and a Half (or was it Mile and a Half-Hi, don’t remember now.)  He gave us a quick rundown on how to make the approach. That is definitely not a strip for beginners like me.  I circled over and thought to myself, “Yeah, mmm, hmmm.  That’s nice.  Next!”

We then flew down into the valley north of Truckee to a strip called Totem.  This was my favorite.  It was really smooth and long and I made a dang fine landing there WITH EVERYONE WATCHING.  This was my first time taking this airplane off-runway!  Kevin gave us the rundown on the strip and a brief history before some of the guys went to land at Totem 2 which is about 1/2 mile to the SW.  The two runways basically make an L shape.  I hung around at Totem 1 and talked to one of the guys (John in the tricycle with big tires?)  I finally took off and circled over head to take a look at Totem 2.  Kevin said I could make it in there and he was right.  I just felt that there was no need to get too ambitious on the first off airport landings I had made in my new plane. 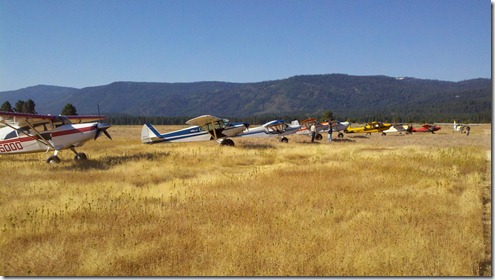 Next we flew over to a strip called Bumpy Barn.  Kevin recommended this strip only to those with big tires and more experience.  Point taken, I’ll just look at it from the air.  From here it was about a 2 minute flight to our next landing spot at a strip called The Ranch.  I was able to make it in there with no issues by following Kevin’s guidance, “land past the patch of green, stay to the right, there’s a gully on the left.”  This strip was a little rougher than Totem but still manageable.  My landing wasn’t quite as good but everyone was too busy to notice (I hope.)  I was the second plane down this time and when I turned to park I saw 3 other planes taxiing behind me!  These guys are good! 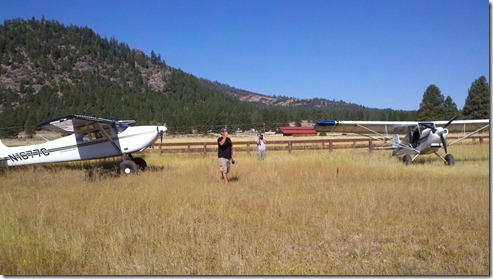 The Ranch is by far the more picturesque of the first strips the group hit today.  Kevin explained that it’s for sale so if you really want a beautiful home with an airstrip in beautiful country, Kevin can point you in the right direction.  Some of the guys departed to go back and land at Bumpy Barn.  I decided to try to shoot another landing at The Ranch and taxied out to take off.  The take off changed my mind about landing again!  For the reason why you have to understand that my plane has a solid tailwheel which has very poor shock absorption qualities.  I also have spring steel landing gear and we all know what springs do right?  So I start my take off roll and everything is looking good and then I hit a small bump and bounce into the air.  I’m not going fast enough to fly so I come back down and bounce a couple more times.  Then I hit another bump and up I go and down I go.  Then I hit a third bump and this was big enough to throw me so far skyward such that I didn’t touch down again.

I checked the clock and found that it was time for me to head back.  I radioed the group and told them that I had to depart the area and they wished me well.

Backcountrypilot.org guys: If at all possible you must come to Truckee and let Kevin take you on one of his circuits.  He is very knowledgeable about this area and is a great tour guide.  I really wish I could have stayed longer.  Thanks again Kevin for a great introduction to the Truckee area.  I’m going to brush up and I will definitely be back for the camp out next time!

Here is the link to my Spot GPS Messenger tracking page if you’d like to see where we went: http://share.findmespot.com/shared/faces/viewspots.jsp?glId=0HrtlSyl3ynThznO2mQli5bKoUA7mtSZx