A little over three years ago my friend Joey Myers and I were visiting with Jack and Myrna Moyle telling them about a group of guys I had been flying with.  We regaled them with stories of Johnson Creek and the High Sierra Fly-In over in Nevada.  I commented how their runway would make a great fly-in destination.  Jack loves airplanes and said he’d love to see some of the airplanes our group was flying.  I asked if we could have a fly-in on their property and they agreed.

This year was the third year we had our low-key fly-in and it was the best yet.  We had about 16 airplanes show up or stop in.  Airplanes began arriving Friday morning.  We had folks come in from Santa Maria and Santa Rosa, Oakdale and Calaveras.  A great mix of local and cross-country folks.  We even had Steve Henry’s old Yee Haw! Higlander show up with it’s new owner on the last day of the fly-in.  Friday was just a day to chill out and set up camp.  Jack and Myrna arranged for us to drive into Jamestown for dinner.  We stopped in at Morelia Mexican Restaurant.  Dinner was delcious!  I wish yours truly would remember to take pictures though.  After dinner we headed back to Red Hills Ranch to watch the sun set and tell lies well into the evening.  It was a really warm evening so no campfire.  We just enjoyed the cool breezes. 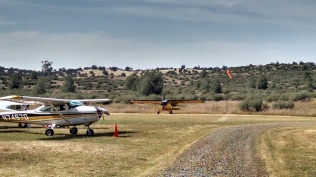 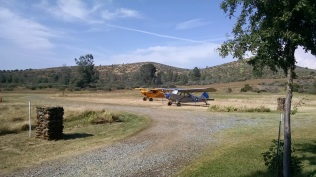 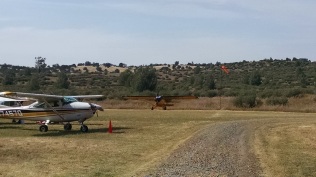 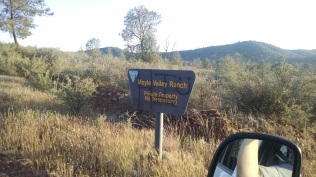 The next morning we piled into our airplanes (I am airplaneless at the moment so I bummed a ride) and headed out to Lodi Airport (103) to have breakfast at the Lodi Airport Cafe.  We met up with a few others that were heading out to Red Hills and had an enjoyable breakfast catching up with old friends and getting to know new ones.  Afterwards we caravaned back to Red Hills.

Around lunch time we had a small water bombing and spot landing contest.  Rob Farlane took the water-bombing prize and Aaron Bartels took the spot landing prize.  Well done guys!  For the rest of the afternoon we all just kicked back and enjoyed the ranch. 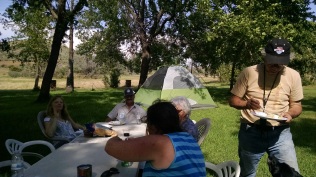 Saturday evening was our pot luck dinner.  There was tri-tip, pork, chile, salad, and a host of other delicious goodies.  Julie brough some of her signature wine and Tom grabbed a crate of apricots from his apricot factory. 🙂  No one ever goes hungry here.  Eating and drinking went well into the evening when we talked, looked at stars, spotted satellites and even spotted the International Space Station going by. 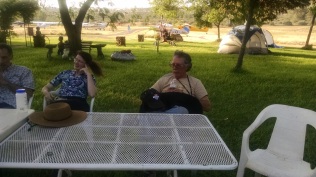 Sunday morning there were some local fly-outs and folks just generally packing up.  The highlight of the morning was Myrna’s breakfast of bacon, sausage, scambled eggs with peppers, and pancakes.  Delicous!  After breakfast goodbyes were said and then folks flew off into the clear blue western skies!

This was a very successul event but we did learn a few new lessons this year.  The fist lesson was that just because some really skilled pilots make this strip look easy, doesn’t mean it is easy.  This is not a beginner strip.  Pilots who are inexperienced at landing off airport in a mountain environment MUST get short field, and mountain flying training before attempting to land at this strip.  The liability waiver and informational video will be ammended to address this.  Other lessons we learned will be addressed before the next fly-in.

Thank you to everyone who showed up and we look forward to seeing you all again next year!