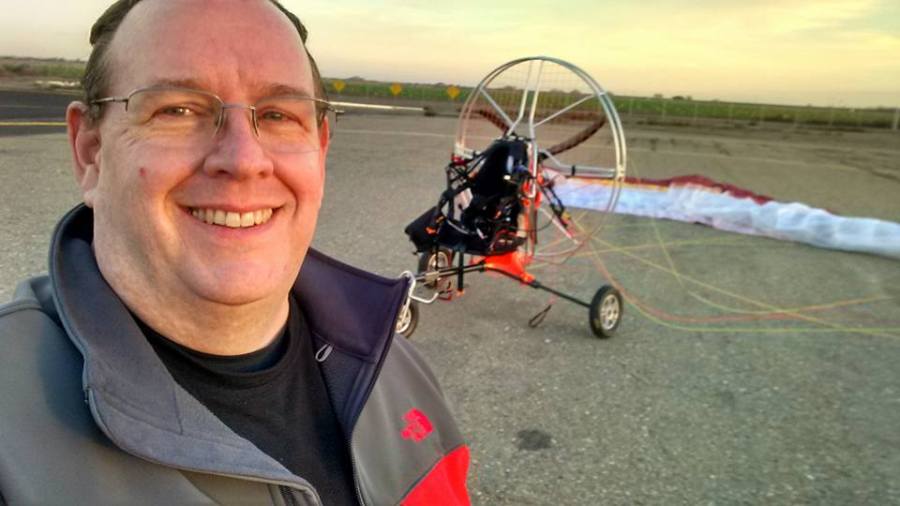 My new routine is to get up early on Fridays and try to fly before going into work.  They don’t mind me showing up late and working late on Friday because they all want to clear out.  But I think I am experiencing a sea change as far as documenting my flights.  I used to have to take pictures and video and share them with everyone.  I would put those pictures and video up on every social media network to which I belonged.  It was bragging.  And I found I was losing sight of the whole purpose of flying; pure enjoyment.  I guess I found that at some point you have to stop trying to share all the moments and just start living in those moments.  Savor each moment.  Experience each moment.

So this morning I arrived at New Jerusalem to find the honey wagon servicing the lone port-a-potty we have.  Thank you sir whoever you are.  There was a distinct smell of garbage dump on the wind.  It wasn’t the rural smells I had hoped for but after some minutes my nose adjusted and ignored the aroma of freshly tilled garbage.  Even the unpleasant moments should be experienced.

I laid out my wing and then warmed up my engine.  After I drove my trike over to where I had laid my wing out I noted the wind had shifted.  I re-laid out my wing and hooked it up to my trike.  Leg straps – check.  Torso strap – check.  Anti-torque strap – check.  Reserve ‘chute – check.  Now secure strapped in I strapped the throttle to my left hand.  With the brake toggles in each hand I press the starter button.  The engine pops to life and mutters  behind me.  I flip my thumbs under the two A lines and check the wind sock sitting on top of my van one last time.  It’s limp.  I could turn and take off down the runway.  Too late, I’m set up pointing directly across the runway towards my van.  I probably won’t hit it.

I take one deep breath… let it out slowly, starting between my van and the airport windsock about 70 feet behind it.  I squeeze the throttle and my trike starts to run, the wing starts to rise off the ground.   My trike strains against it like a eager dog on a leash pulling it’s reluctant owner along.  As my wing rises over my head I stop looking forward and start looking up.  It’s almost overhead so I release the As and pull on the brakes just enough to keep the wing not quite vertical.  It’s leaning behind me just slight and it’s not moving side to side at all.  I squeeze the throttle all the way and slowly release my pressure on the brake toggles.  The wing does what it does best and lifts my trike and I up by the harness.  My wheels clear the 7 foot tall weeds by 3 feet or so and we are slowly rising into the still morning air.

(The sensation of taking off in a powered paraglider is much different to me than taking off in an airplane.  In an airplane, you feel the airplane lifting you off the ground.  In a PPG it feels more like someone is holding your harness and picking you up.  It’s a sensation that’s hard to explain.)

The weeds in the field fall away and I climb into the crisp air.  There are wisps of fog hugging some of the alfalfa fields and orchards.  It seems much more like Fall than Summer this morning.  I make some lazy figure eights over the airport as I climb.  There is no wind at all.  I fly over two farm workers walking back to their cars.  I fly over commuters taking back roads to avoid the freeway.  I’m gliding along in silky smoothness.  The only disturbance is my engine growling on my back.  I fly back to the airport and do three touch and goes.  I then turn and land the wrong way so I can shut down next to my van.

I kill the engine and roll to a stop.  The wing softly rustles to the ground and then there is only silence.  I again stare toward my van and take in another deep breath and then slowly let it out.  I sit for a few moments listening to the “clinks” as the engine cools down.  Then I unstrap in reverse order; reserve ‘chute, anti-torque strap, torso strap, leg straps.  I shimmy out of the shoulder straps, doff my helmet and then drop it in the seat.  The garbage smell is gone.  I smell alfalfa now.  The sun is warmer now.  I take my jacket off and gather up my wing.  I didn’t realize I was smiling until I got back to my van and saw my reflection in the window.  The look of a man who had been living in the moment. 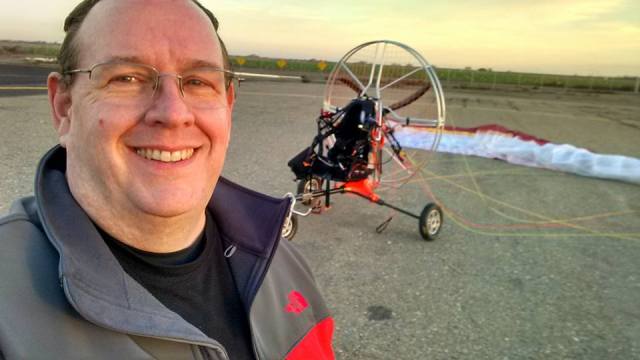