I can’t believe another year has come and gone and we’ve had another Red Hills Fly-In!  The Red Hills Fly-In is held at Jack and Myrna Moyle’s Ranch, nicknamed Back To The Future Two Ranch because numerous scenes from the movie were filmed there.  When I had my airplane I would load it up with my camping gear and fly in.  Now that I have my powered parachute I load all my camping gear into my trailer and basically camp in the trailer.  The Moyles’ ranch is located in prime territory; completely surrounded by the Red Hills BLM Area of Critical Environmental Concern.  As such, no hunting or motorized vehicles are allowed in the area.  Other than the sawmill on the other side of highway 120 it is completely serene and peaceful… except for the airplane noise!

Most people fly in. 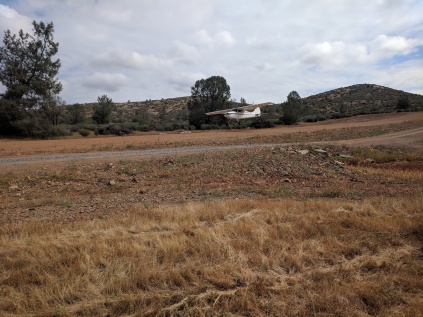 But others like me have to take the winding dirt road through the BLM land to get to the Moyles’ ranch.  But that’s really not a problem as it’s such a scenic drive.

Once there we pretty much just chill, relax, and catch up with old friends.  Many of us only see each other once a year but when we get together it’s as if no time has passed.  We talk and eat late into the evening and when the chill hits we keep talking and eating around the campfire. 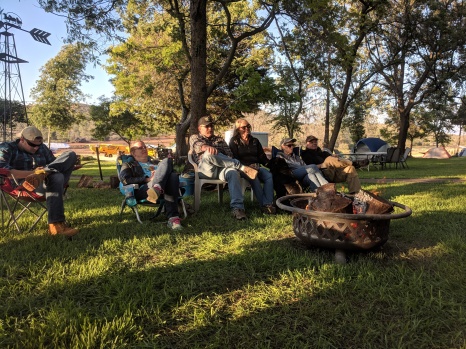 This year was notable for me as it was the first time I had the confidence in my skills and ENGINE to fly my powered parachute from the field.  Well, and the wind was cooperating this year too.  My flights weren’t long because I’m still tweaking on the engine and learning to trust it.  But they were beautiful.  I’ve flown my fixed wing through the area for years but there’s something about seeing it from an open cockpit 300 feet up.  You can smell the smells and really see what you’re flying over.

Jordan Langley caught my take-off and landing on video.  He also got a great shot of Joey Meyers and I flying by in (very) loose formation.

All in all a VERY enjoyable weekend and I can’t wait to go back next year!