The smoke is finally starting to clear here in California’s vast Central Valley but at the peak of the smoke problem Cristy and I just had to go find some clean air.  We decided to head to the beach!  Our favorite beaches are near Monterey.    Monterey Bay has numerous beaches and wildlife so is one of our favorites.  Plus it’s fairly close to us.

We trekked down I-5 to Highway 156 and over the hills.  The Diablo Range specifically.  On the way we stopped at Casa De Fruta for some snacks to take with us to the beach.  It’s a good bathroom stop along the way too.  If you have kids its a great stop with a small train, petting zoo, and lots of stuff to help the kids expend their energy.

We continued on to the coast and stopped at Sand City Beach near, you guessed it, Sand City.  We actually park in a large shopping center just before Sand City.  We got on the Monterey Peninsula Recreational Trail and walked the short distance to the beach.   We walked up the beach a bit and then set up our chairs in a spot next to the cliffs that was sheltered from the wind.  Although it was forecast to be 104F back at our home, the high temperature in Monterey was forecast to be 69F.  At the moment it was only 59F!   But we had brought our jackets and the view under the coastal fog was wonderful.  And the air was spectacular.  It was the first non-smokey air we’d had in weeks.  We just kicked back, watched the little ground squirrels (beach squirrels I guess) scurry around us looking for scraps.  I tossed them a couple of raw almonds.  SCORE!  We also watched the paragliders silently soar along the cliff sides. 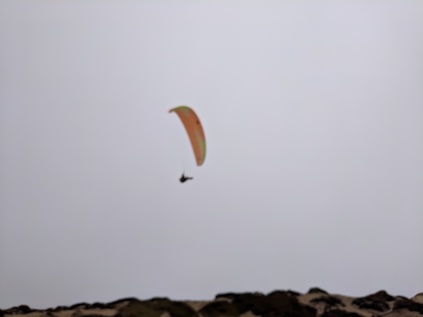 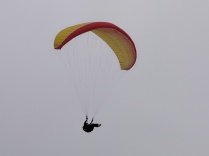 The ONLY thing we don’t about this beach is it tends to have a lot of seaweed and associated seaweed smells.  So we decided to move along.  We drove north towards Moss Landing to see we we could find a better beach.  Just as I was approaching the Moss Landing city limits I saw a sign for Salinas River State Beach so I decided to turn off and check it out.   To our surprise the parking lot only had 7 or 8 cars in it.  We unpacked our chairs and walked down the sandy trail over the hill to the beach.  We walked a short distance along the beach and set up our chairs.  At this point the fog was starting to break up and the warm sunshine felt good.

We decided we had sat enough for the day and took our chairs back to the car.  I noticed a sign for a nature trail so we decided to walk down it to see what that was all about.  So glad we did the views of the backside of the dunes were stunning.  Dozens of varieties of flowers, sea grasses, and succulents lined the trail.  We walked down it for about a mile before taking a side trail that lead over the dunes back to the beach.  This section of the beach was entirely deserted except for one jogger and later a train of horses and riders.  It was absolutely wonderful and we’ll definitely be back to this beach. 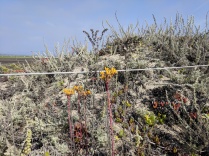 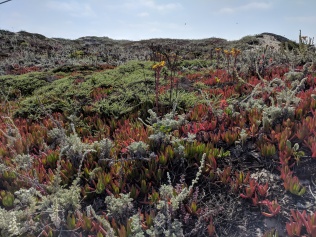 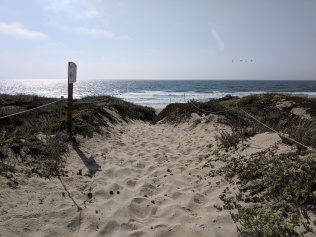 We walked back down the beach to where we first entered the beach earlier and headed back to the truck.  We then drove up across Elkhorn Slough to a small marina and had dinner at the Pacific Grill.  We had lovely views of the slough and the sea otters and kayakers that were out on it as we had dinner.  After dinner we just sat in the truck and watched the otters and kayakers on the slough until the sun sunk into the re-forming fog.  All in all a wonderful day!