Okay so one of the joys of being a pilot is being able to brag about the places you visit. So here goes. I’ve been wanting to take a longer flight than just flitting around my local area for a while now but the weather hasn’t been cooperating. Today was the perfect day for a road trip, er, air trip! The weather was perfect, a little overcast, temps in the 70’s, no wind to speak of, great early Spring day. Yep. It’s beach weather so I headed to the coast.

I had a hankerin’ for fish so Half Moon Bay was the destination. Specifically, Barbara’s Fish Trap. So I launched into the hazy air of California’s Central Valley.  My direction of flight was to make a beeline for the Altamont Pass, then directly to Sunol, the Dunbarton Bridge, then to squeeze between Palo Alto and San Carlos’ airspace and then pop over the hill to Half Moon Bay. This would keep me out of the San Francisco Class B airspace and out of the numerous Class D’s I just mentioned.

The flight was perfect. A little hazy but that’s what it’s like when we don’t have wind. I scooted over the Altamont, tuned to Livermore and watched for their traffic as I skirted their Class D. Passed over the Sunol grade just as planned, past Mission Peak in Fremont and then headed toward the bay and the Dunbarton Bridge. That’s when my GPS lost signal. Crap. I waited a minute and it came back. Great. As I went feet wet over the bay, my GPS lost signal again. Crap again. I was only about 20 minutes from KHAF at this point. I’d hate to have to turn around now. I didn’t need it to keep from getting lost, I needed to navigate the 1 mile wide corridor between Palo Alto and San Carlos’ respective Class D airspace. The GPS came back and then stayed solid so I continued on. 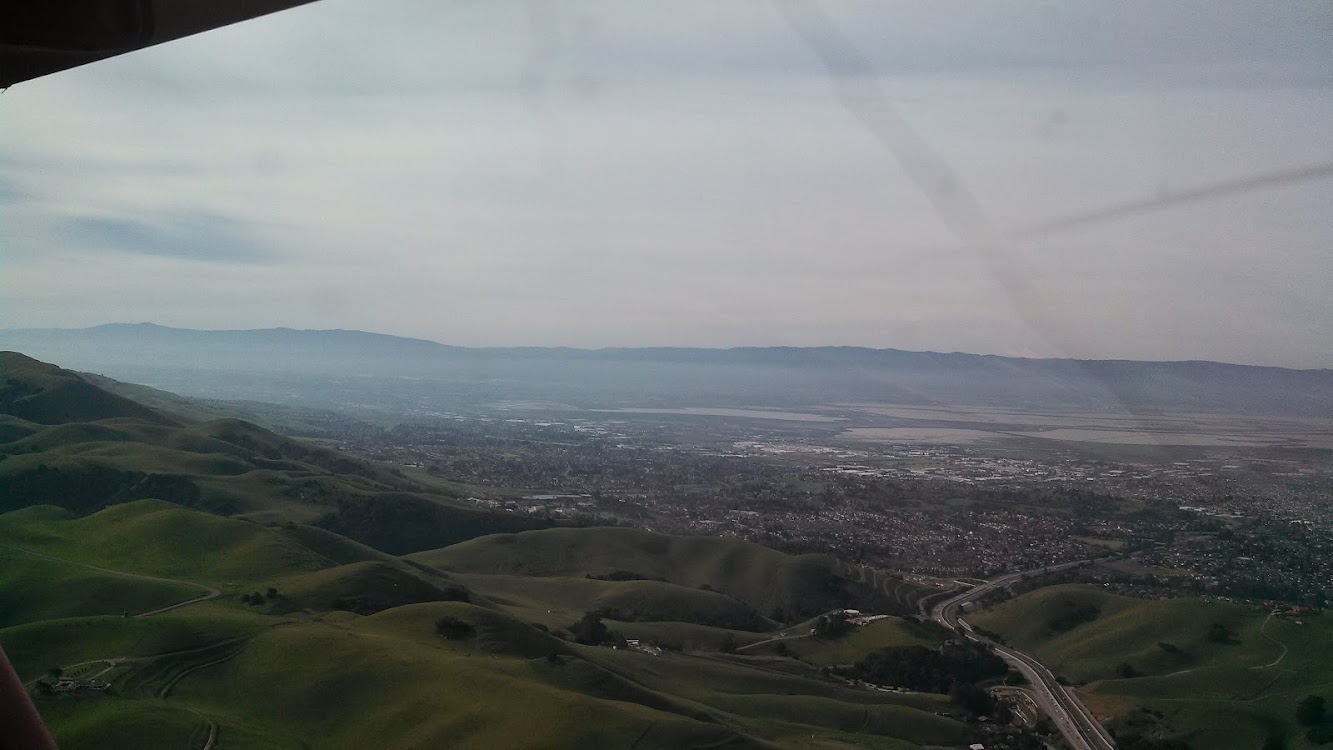 I kept a close eye on the jumbos on final for San Francisco and also for any traffic coming out of Palo Alto. I finally popped over the hills and made it to the coast. Ah, sweet relief. 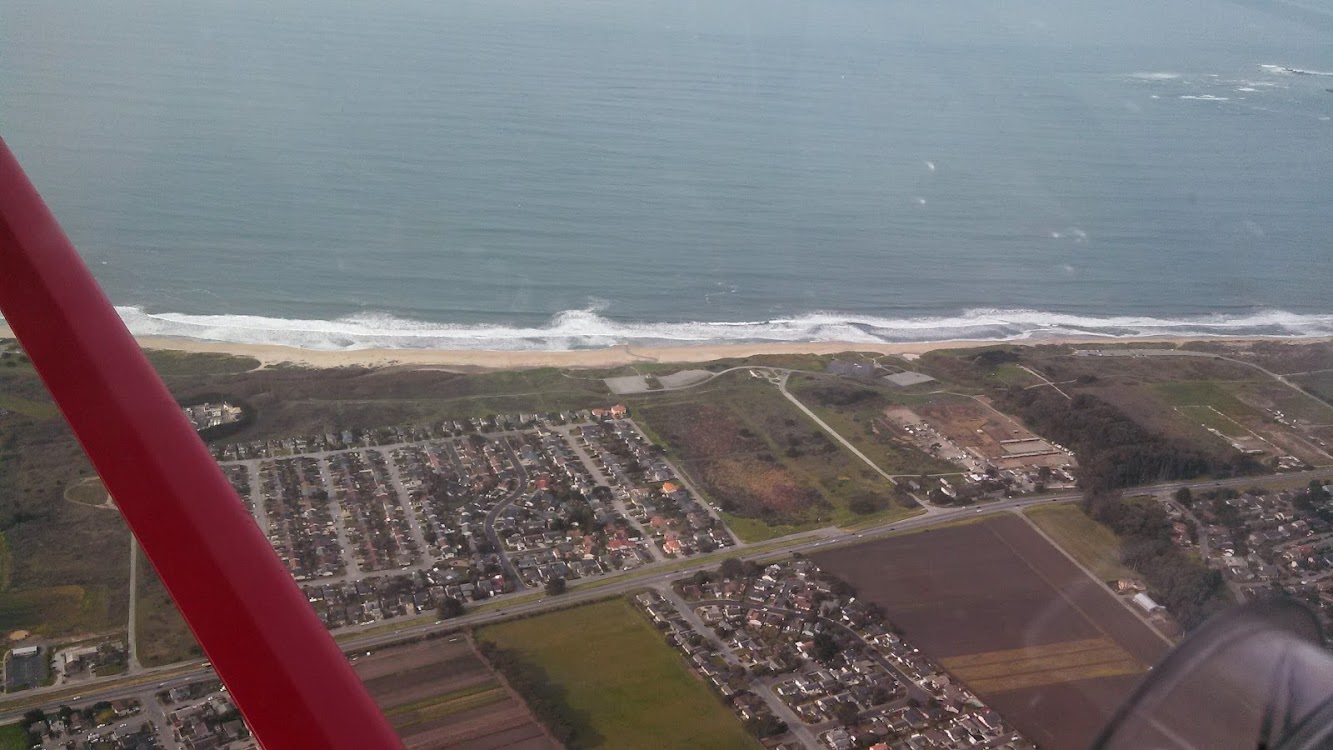 There was only one plane in the pattern at KHAF, I announced, joined the pattern, and landed within minutes. The taxi to the tie downs was LONG. It took about 10 minutes to taxi to the tie downs closest to the gate into town. I got there and tied my ship down. Walked up to the gate, wrote the code down on my arm so I could get back in with out walking another mile to the terminal. 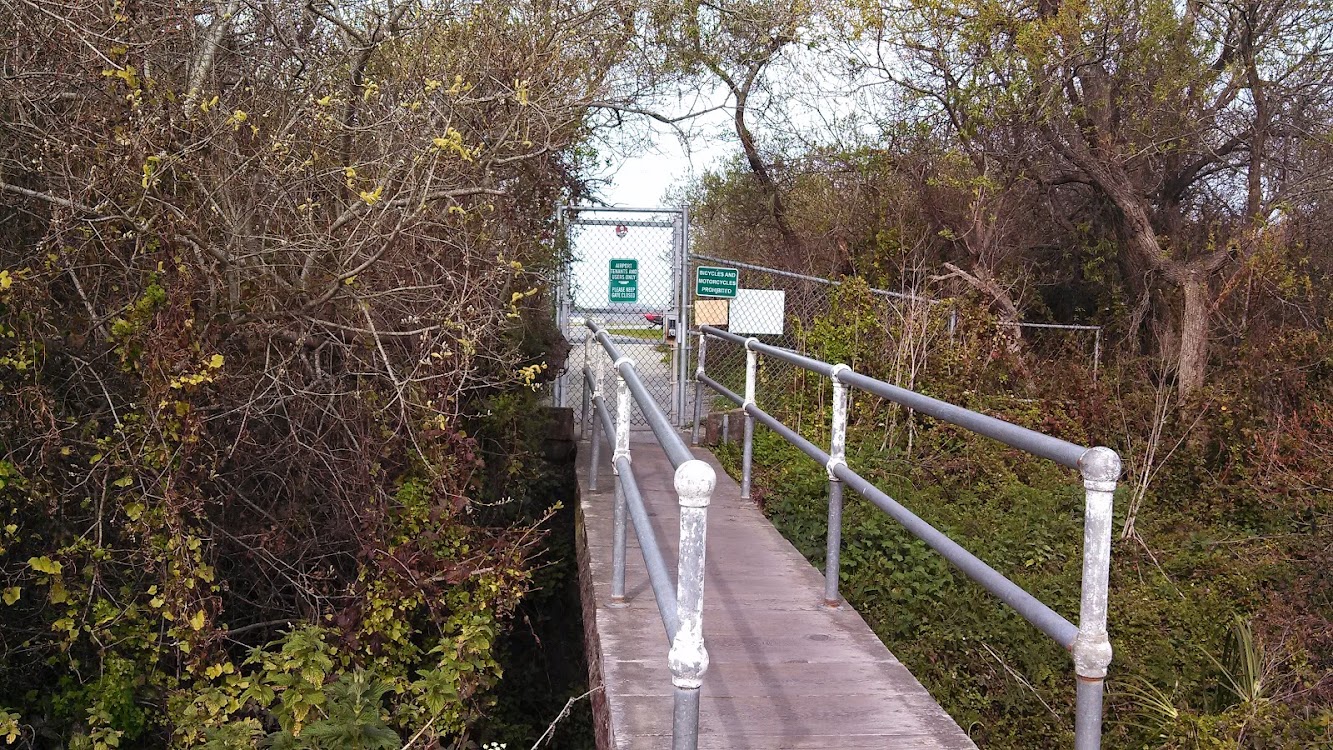 Once through the gate it’s only a 5 minute walk to Barbara’s. It’s located right on the beach with a view of the marina. I got there before they opened so I just walked along the piers watching the fishermen unload and listening to the fog horn. I finally got the fish lunch I had been salivating over. Since Cristy wasn’t with me, I bought her a togo box of fish and then headed back to the airport. 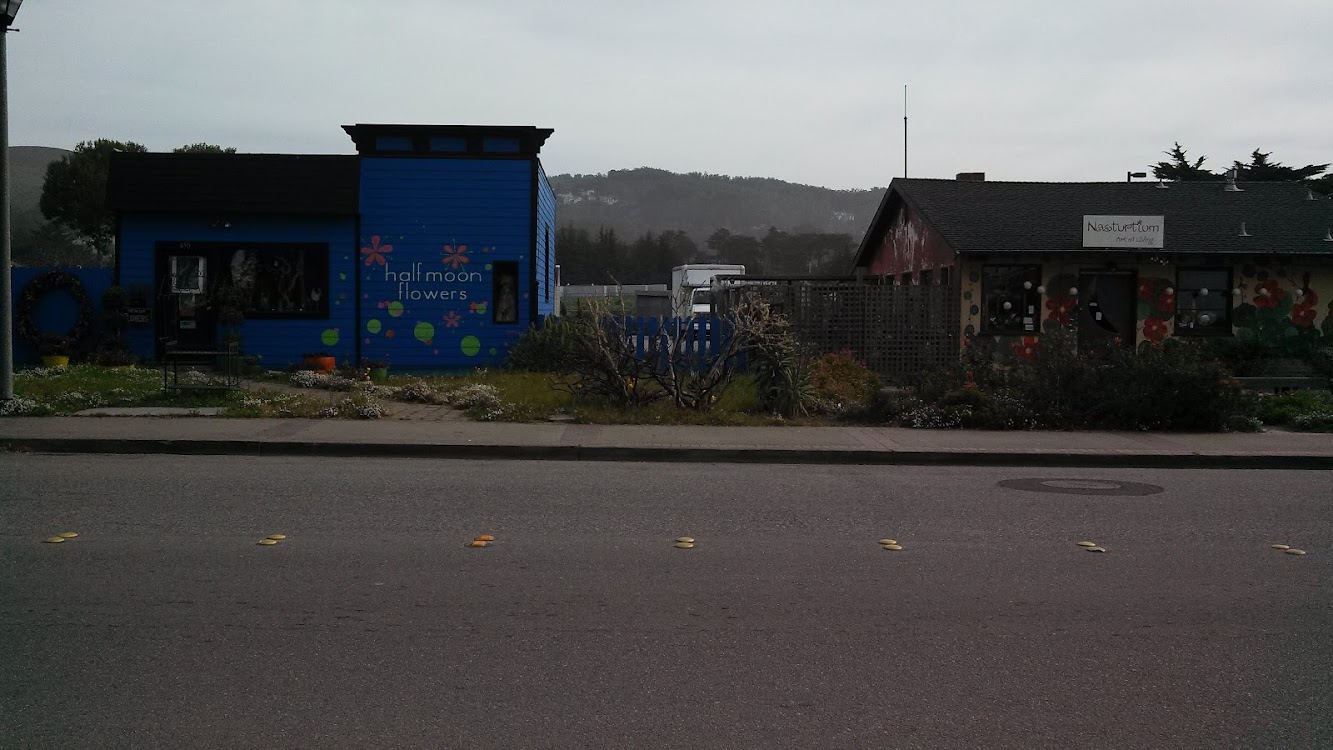 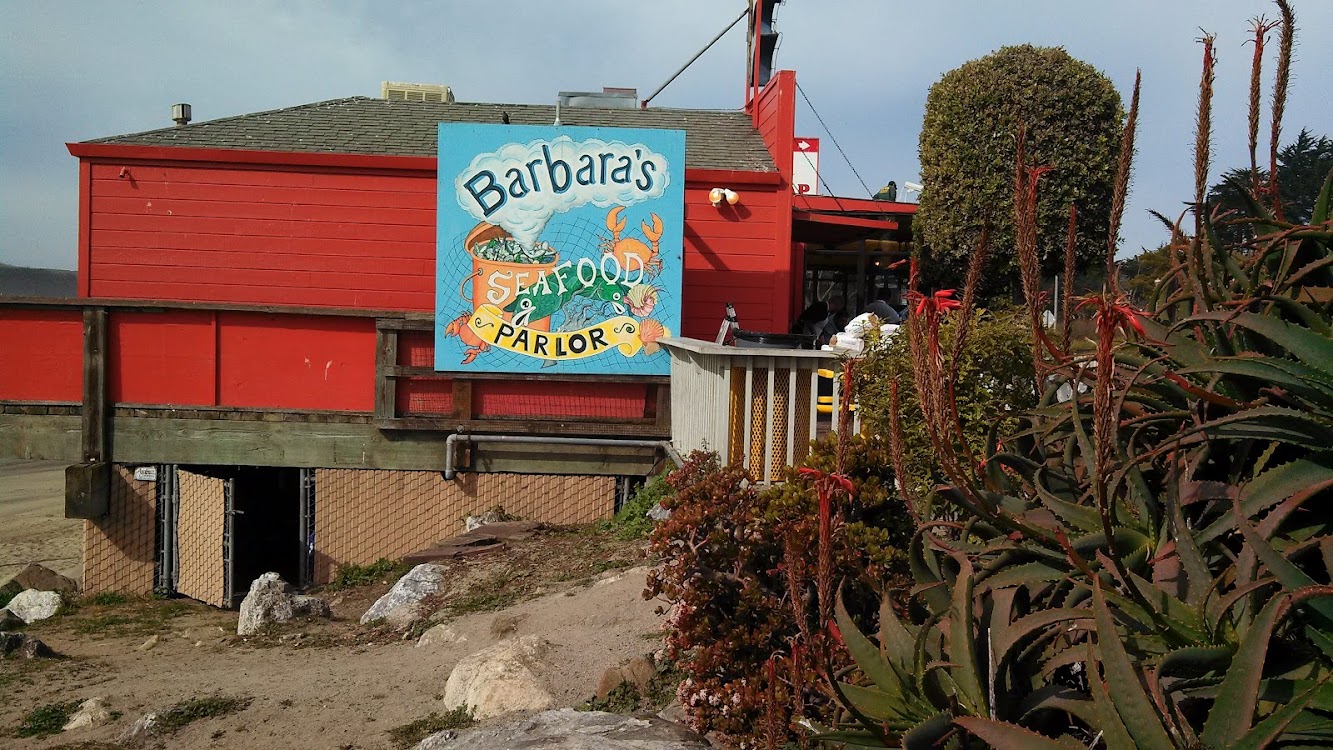 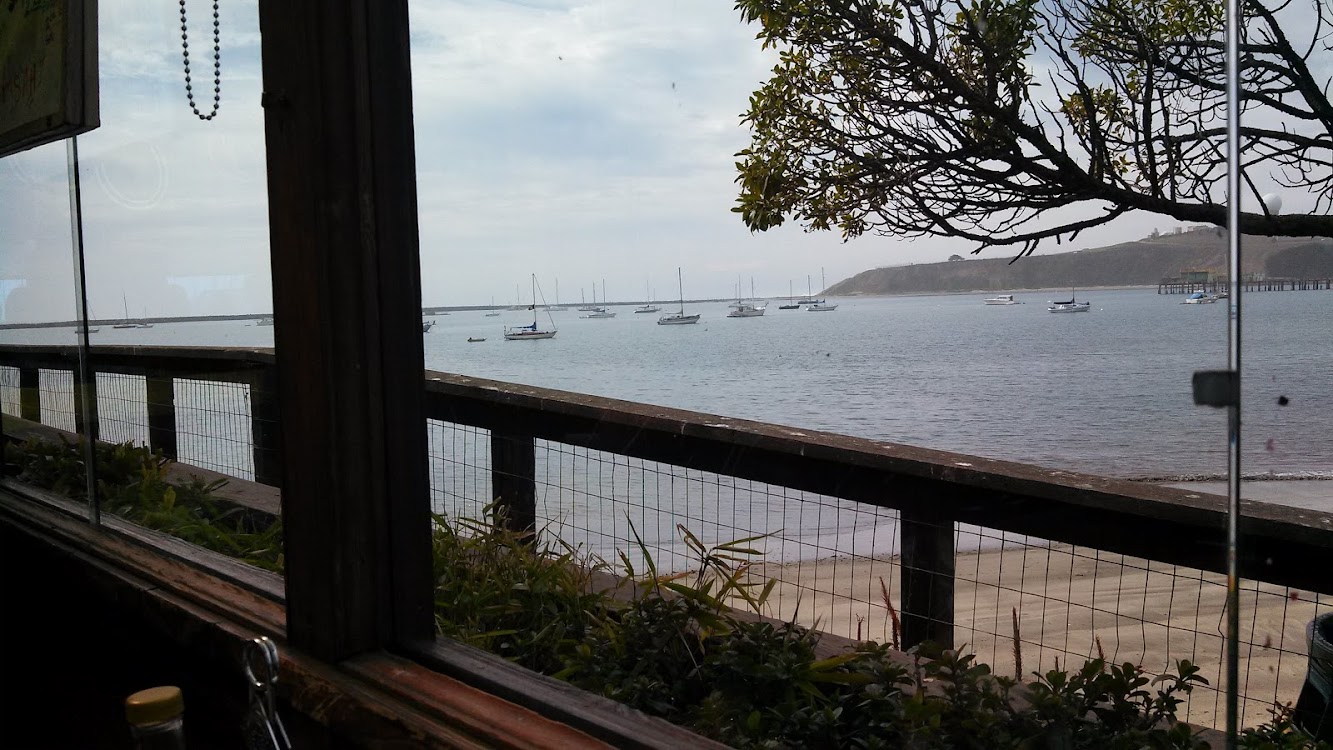 The wind had changed so I had to taxi all the way from one end of the field to the other, 15 minutes of taxiing! I finally got to the other end, did my run up and launched into the air to the south toward the marina. I was already at 1000 MSL before I got to the marina so I did a slow 180 to point back to the north.  For my trip home I decided to fly north, skirt San Francisco, fly over the Golden Gate Bridge, and do the north bay tour around to Suisun Bay, past Mt. Diablo, and then into the valley and then beeline home from there. And that’s pretty much what I did. 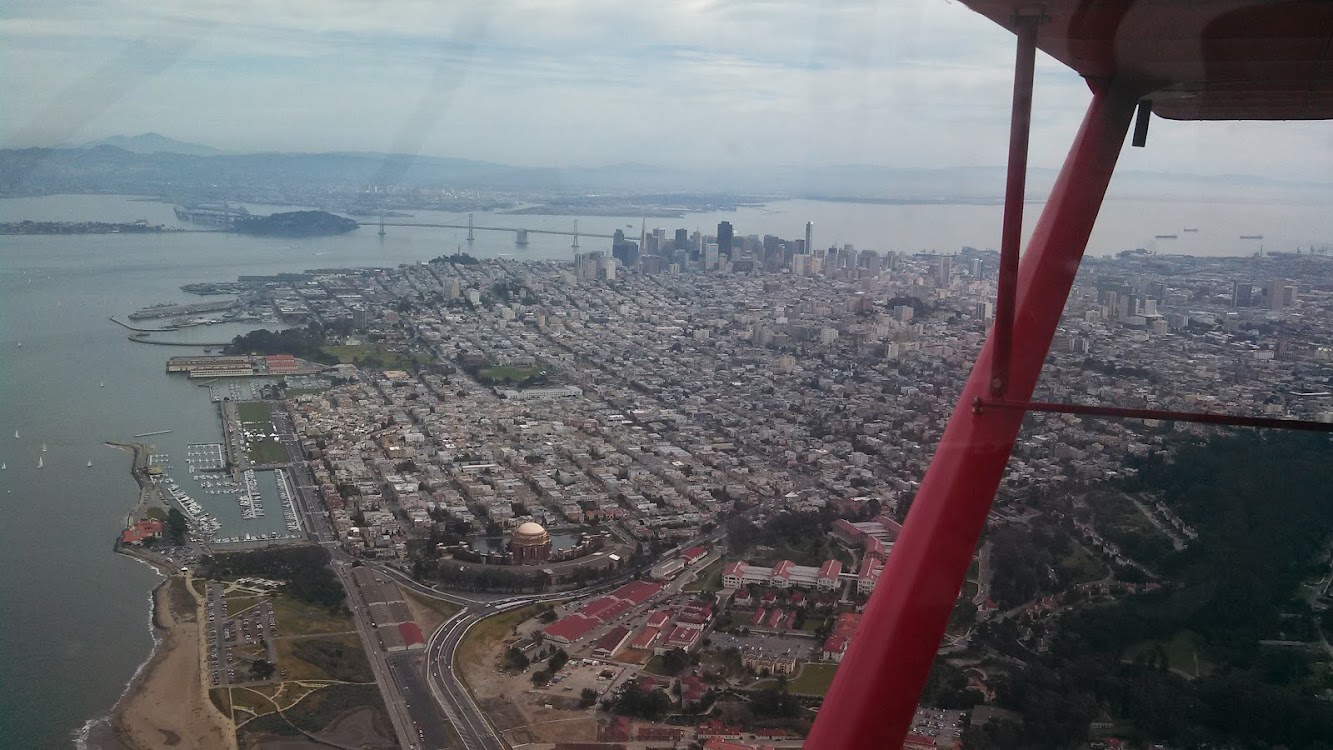 (The domed building in the lower portion of the picture has special meaning to me. It’s called the Palace of Fine Arts and is where Cristy first kissed me) 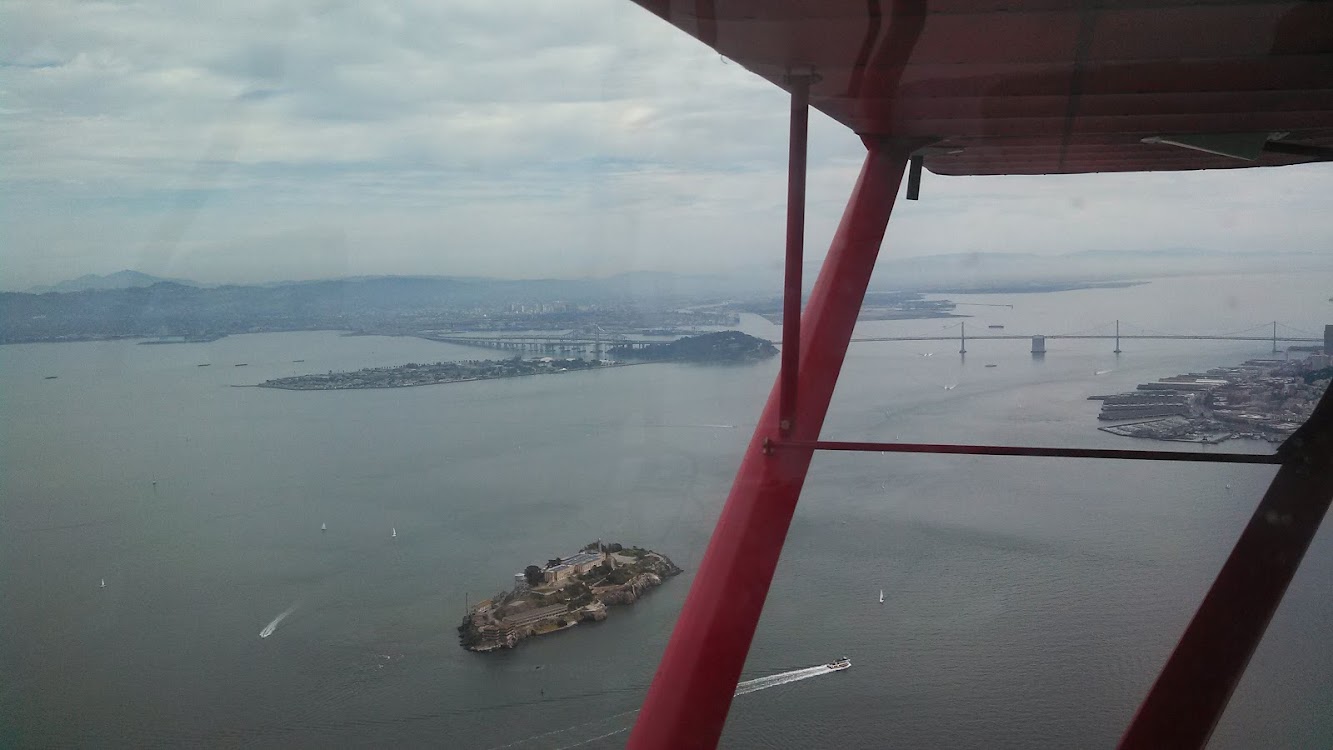 The entire trip was uneventful, not really the best sight seeing weather but good flying weather. It took me an hour and 6 minutes to get there and an hour and 20 minutes to get home. This would normally be a 3 hour trip one way through horrendous traffic. I love flying!