I did.  I had put my plane up for sale, and was getting ready to drive my daughter 300 miles so she could perform in a music festival.  I decided to take a quick flight up to a local airstrip in the foothills to pick up a book I bought.  Wind was calm at the field and everything looked good. I made two passes from the north, and then two more from the south to see what the best approach would be. I decided that given wind on the ground and obstructions it would be best to land from south to north. I set up and was making a picture perfect approach. However, I ended up coming in short and my landing gear impacted a berm at the south end of the runway that I had not seen from the air. (You can see the direction I was approaching from in the second picture, note how the field looks flat leading to the tree line, it isn’t it is undulating.) The top of the berm is level with the runway, and runs downhill to the south. There was an optical illusion in play that made the ground look flat when it really wasn’t. After impacting the berm the airplane bounced about 10 to 15 feet in the air and then impacted the ground approximately 50 feet from the end of the runway. The aircraft slid maybe another 5 feet or so after impact. The engine stopped immediately on impact.

With the sound of the plane’s ground impact still echoing in my ears (somewhere between a loud pop and a bang) I slowly moved my feet and toes to make sure they were fine. Moved my legs. All good! But ooh, my back! I crawled out and called my wife. She was just happy I wasn’t hurt. At least not much. Nothing but a skinned knuckle and sore back.

The plane was picked up by Plain Parts and stored at their location in Pleasant Grove.  At the time I didn’t know of anyone who could work on my plane so the insurance company found a guy. After one month had gone by and we hadn’t heard from him I called Rans and they recommended Rainbow Aviation in Corning.  My plane moved there and I am now waiting for the repair estimate.  Depending upon the price the insurance company could elect to total.  So, we’ll see. 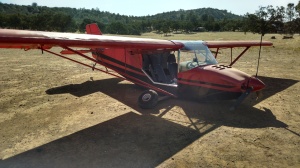 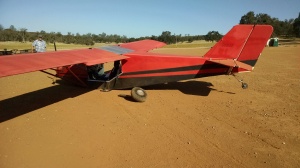 3 thoughts on “Those that have and those that will”