This past weekend I traveled to the High Sierra Fly-In as I have for the past several years.  These last two years I have travelled by ground as I don’t have my airplane any more.  This year I brought my airplane with me in the car.  That the beauty of having a powered paraglider, you can take your aviation with you anywhere.

HSF 2016 was held in the same place as last year, Flanigan Playa a.k.a. Dead Cow Lake.  It can be a challenge to drive there.  The shortest ground route takes you over some majorly washboarded roads.  There is however a much smoother route that can be driven at freeway speeds almost all the way to the lake’s edge but it is also much longer.  I took the bumpy route going in, and the smooth route when I left.  Actually getting there was quite an adventure this year.  We entered the lakebed from the north side this year rather than the south side and the directions were a little terse causing me to make a wrong turn.  I ended up on a two-wheel track that was deeply rutted and was surely not the kind of road my mini-van was designed for.   As the road deteriorated I decided I must have made a wrong turn.  I found a place to turn around and headed back, making sure to keep my speed up so I wouldn’t bog down in the soft playa dust.  I finally found the road I should have turned on and all was well.

I found where my friends Rich and Hawk were camped and set up camp in the lee of their motorhome.  The first order of business was to unpack and assemble my PPG.  This took about 15 minutes.  Then I set about rigging my mini-van for motorhome mode.  I had already taken the seats out, I just needed to rearrange things to give me a place to sleep.  It was too late in the day to fly so I just drove my PPG trike around enjoy the amused and slightly jealous looks of the other pilots.

As evening rolled around some fellow PPG’ers wanted to go fly and invited me along.  I was not certain I wanted to go with all the air traffic flying around.  So after they took off and I was certain wake turbulence was not going to collapse their wings, I decided to set up and fly.  I got to enjoy a very nice sunset flight around camp and out over the sagebrush.  I didn’t take any pictures.  Some moments were meant to just enjoy.  Besides, all I had with me was a brand new cell phone and I wasn’t interested in dropping it.  This was my first time taking off at this density altitude (about 4500 feet).  It took more speed and time to get the wing to fly, and for the trike to leave the ground.  In my head as a pilot I knew to expect this, but when it happened I was still somewhat surprised.  At any rate I enjoyed my flight and landed just before sunset. 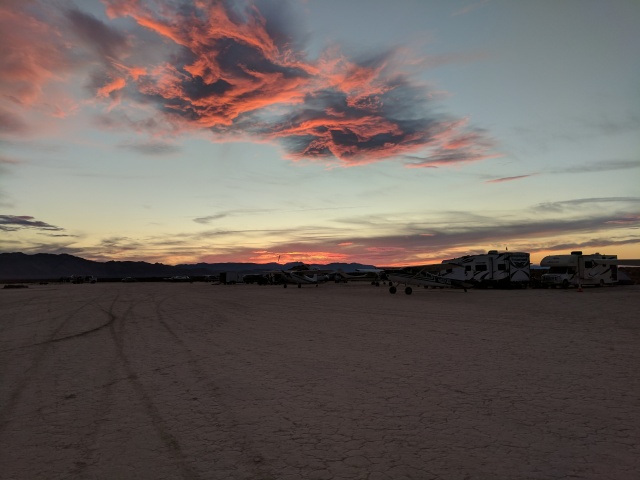 After sunset I headed over to the the nightly bonfire to catch up with old friends.  I’ve noticed that the type of pilots showing up is slowly changing.  The guys that have been around for years are their same friendly selves.  But there are new pilots showing up who gather in clusters and aren’t really there to make new friends but only to impress each other.  I guess HSF is what you make of it.

The next morning some of the PPC and PPG guys went flying but it was just too cold for me.  I would not enjoy flying in 30 degree temperatures so I stayed on the ground.  It was fun to watch the intrepid souls who did fly.  Including this helmet cam footage of my friend Edward Ang who almost flew through a tent!

Later in the day we gathered for the STOL Drag Race.  The idea is two place line up side by side at the start line.  At the start signal they fly 3/4 mile and land just beyond a line and try to stop as quick as they can.  Once stopped they are allowed to turn around take off and fly back to the starting line.  The winner is the first to land and stop beyond the start line.

After the STOL drag I learned I was coming down with the flu.  Dang.  I relaxed as much as I could the rest of the day and waited for the evening bonfire, dinner, and fireworks. I busied myself with breaking down my Cruise Carbon Trike to get ready to pack it in the van in the morning.  I had planned to enjoy the fireworks that evening, however all I could manage was dinner.  I started getting the chills and headed back to my minivan to crawl into my sleeping bag to warm up.  I tossed and turned fitfully as the fireworks and tannerite were set off.  So, sadly I couldn’t enjoy this portion of the fly-in this year.

The next morning I packed my trike into the van and caravanned out with my buddy Joey.  We took a different way out than we had come in and the roads were much smoother.  But longer.  It added an hour to the trip for me but that was fine.  I wasn’t feeling up to washboard roads that morning.  The rest of the trip home was uneventful.

If you are a pilot or just love airplanes and things aviation, this is a great event to attend.  Just make sure you are set up for desert camping AND cold weather camping.  Bring an RV if you can.  Makes life much more bearable there.  And THANK YOU Kevin Quinn for coming up with this event and moving mountains to make it happen.