I’ve been feeling grumpy all day.  Not sure why.  Just moody.  I was so happy to see the wind forecasts were very favorable for this afternoon.  Sure enough, when I got out to New Jerusalem (where the earth meets the sky) there was only a hint of thermal activity and very little wind.  I laid out my wing, warmed up the motor on my trike, strapped in, and had one of the best launches I’ve had in a while.  Slowly advancing the throttle, flying the wing first, then squeezing in the throttle more and more until the wing lifted me into the sky.

I flew over to the Tuolumne River to see how high it was running.  It’s still well within it’s banks but still running much higher than normal.  It’s a reminder of it’s former glory before the dams and irrigation canals were built. 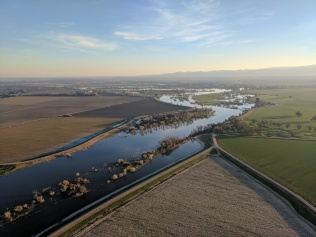 There was one house that was completely surrounded by the rising waters.  Their barn and equipment were under water.  Hopefully the waters will recede before the snow starts melting in the mountains.

I flew along the river until I started getting cold.  I turned back toward the airport and decided to do a few touch and goes.  All four touch and goes were really good so I decided to call it quits.  My hands were starting to cramp so I was just done.    I rolled to a stop in front of my truck.  I sat a listened to the birds and felt so much lighter than I did when I took off.  There’s just something about flying that frees me.