It’s one of those days that I need to keep me going.  It started out early and COLD!  My flying buddy Jordan texted me last night and asked if I wanted to go on a quick flight the next morning.  Just a quick 30 minute flight up to Columbia (O22) and back to Oakdale (O27).  I had plans to drive up to Sacramento with Cristy but I had a feeling that I could fly with Jordan and be back home before Cristy even had breakfast.  Turns out, that was the case.

I met up with Jordan out at the airport around 6:00am or so.  We got the airplane ready (trying not to shiver too much in the predawn twilight). We squeezed ourselves into our little Cessna 152 and were taxiing out to take off just as the sun was starting to peek above the Sierras. 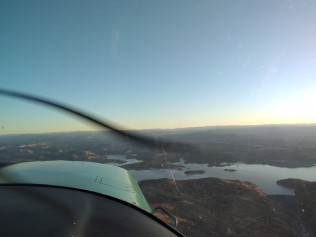 It was a beautiful flight up to Columbia.  Nothing would be open when we got there but that wasn’t the point.  Whenever I fly, and this morning was no exception, the destination is always secondary to the journey.  The journey IS the destination.

As I said it is a quick flight up to Columbia from Oakdale.  It’s the “mountain airport” in our back yard.  It took about 30 minutes to fly up there.  No small feat as we were flying almost directly into the sun.   The airport is very difficult to locate as it sits in the shadow of a hill and is hard to spot during these early mornings until you are right on top of it.  However, Jordan demonstrated his piloting prowess and got us in and down in one piece. 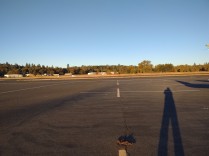 As I thought everything was closed when we got there.  It was only about 7:30am and they hadn’t opened up the FBO yet.

We piled back into the plane and headed back down to Oakdale.  Yours truly was the pilot in command for the return leg of the trip.  We scampered skyward and followed the lava flows from Columbia back down to Knights Ferry and then back home to Oakdale.  I entered on a left crosswind and made a fairly decent landing.  It was an awesome way to start the day. 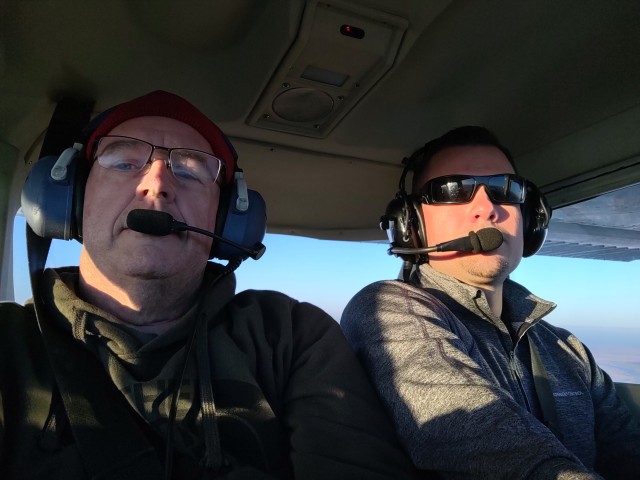 After the flight I headed back home and picked Cristy up and we drove up to Sacramento.  The reason for our trip was to check out some 5th wheel trailers at LaMesa RV.  On the way up I stopped off at Meeks RV in Acampo to pick up some repair parts for my Lance 1995 travel trailer.  They were minor nuts and bolts, easily repairable and no need to take the whole trailer in.

The 5th wheels we wanted to see at LaMesa are a new brand that just came to my notice called Vanleigh.  They are manufactured by Tiffin, the famous motor coach manufacturer.  We have been looking at them online and liked what we saw but we wanted to see what the build quality was like.  While we originally went up to look at the Vanleigh Pinecrest models, once we saw them we were underwhelmed by the build quality.  We looked at the next model up the Vilano series and found them much more to our liking.  We ended up liking one of their larger models the best and this kind of surprised us.

We’ve always looked at rear living models but none were laid out this way.  We also really liked the HUGE (YUUUGE) rear storage bay. I wouldn’t want to put really heavy items back there but it would be great for bulky items.  I also wish the build quality was slightly better.  I understand them wanting to use really light materials but it gave the overall feel of the unit a chintzy feel.  Overall the interior looked great and they paid attention to a lot of details that other manufacturers miss.  I’m not sure this has changed our mind away from the Grand Design units but we did change our mind about one thing though; we’re not going to limit ourselves on the size of the trailer.  If it’s 40 feet, then it’s 40 feet.  Smaller would be better but it’s not a deal-killer anymore.

In my next blog post I’ll do a comparison of the 5th wheel models we are considering at the moment and why.